An old Facebook story, but one of my favorites:

Natalie is my independent soul. At age three, she’s big on doing things herself. Lately, her biggest obstacle to overcome is opening packages of string cheese. As she pulls it out of the fridge I ask her, for the sixty-seventh time, if she would like me to help her with it. 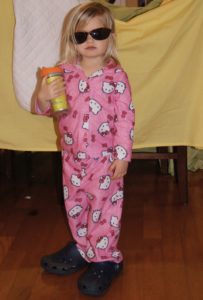 She can’t do it.  As proven by yesterday.  And the day before that.  But she’s determined.  So she tries it again.

She wrestles with the package, knowing that, if she just tries a little harder, or pulls it this way instead of that way, she’ll succeed in her endeavor. She tries, just as every day before, to be strong enough, independent enough, to prove to the world that she doesn’t need anybody. She can do it herself.

Eventually, after much tiresome struggle, she realizes.  She can’t do it, not by her own will.  No matter how independent she is, her strength is not sufficient.  She needs help.  So she comes to me.

Essentially, she says, “Help! I’m in need! Who will save me from this wretched package of cellophane so that I may eat and be filled?” And I respond, not with shouts of “I told you you couldn’t do it! I told you you were too weak!” I don’t tell her she’s not good enough. Or strong enough. I don’t tell her to try harder. Instead, I quietly open the package for her and say, “Here you go, my love.” She is saved from the evils of the child-proof processed food container! In essence, I rescue her from what she’s incapable of doing on her own. And I do it, not with guilt or put-downs, but with grace and love. And I will do it again tomorrow. Because she is my child, and I love her more than anything in this world.

In other words, it’s the Gospel.  According to Natalie.