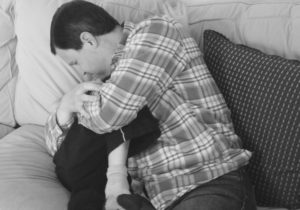 Do you know what one of my favorite things to watch you do is?  I love to watch you wrestle with your Daddy.  I love how the two of you like to try to beat each other to a pulp and laugh together as you’re doing so.  I love how, even though he’s nearly twice your height and three times your weight, you come at him as though you truly believe you can conquer him.  And what’s funny is that the more he proves to you that he is the mightier opponent, the more you seem to enjoy it.  But sometimes, in his mercy, he offers you the illusion that you have the upper hand.  It’s what gives you the adrenaline to keep coming back for more, I think.

This male bonding experience that you two share – it’s odd to me.  We girls don’t typically do such barbaric things.  We would much rather bond over tea and cookies and Jane Austen movies.  But even though I don’t understand your masculine inclination to fight each other like wild savages, I do understand the value of such behavior.  The joy you both seem to share when embracing each other in headlocks and trying to throw each other to the ground seems to create a strange connection that only men and boys can truly comprehend.  It’s a special love language you share; and even though it looks as though it’s causing you both great pain, I can see in your faces that it’s joining your hearts together in some secret manly ritual of love and intimacy.

Last night I was watching you wrestle with the most important man in your life – you in your robot pajamas and him with the smell of an evening brushfire ruminating from his thermal shirt and blue jeans.  I hated to bring it to an end, but bedtime was beckoning, ruining your fun as it does every evening.

This morning as I sat down with a cup of coffee for a few minutes of uninterrupted reading before the day called me to action, I read something that brought to mind the story of Jacob in the Bible, and it made me think of you.  Jacob was a man whose life wasn’t going the way he had hoped because of some bad decisions he had made.  He had cheated his brother out of his birthright and ran away from home.  His relationship with his father-in-law was built on dishonesty and deceit.  The women in his life were chock full of drama.  His life was a mess.  Eventually God told him to return home to his family, where the brother he had wronged so many years earlier still lived.

On his return journey he found himself awake in the middle of the night, alone with his fears, not knowing whether his brother would forgive him or try to kill him.  Out of nowhere he came face-to-face with the God of the universe.  With Jacob’s heart burdened by the series of unfortunate events in his life, God came to him – not to talk, not to lecture, not to criticize – but to wrestle.  Man to man.  All night they scuffled like wolves until Jacob eventually had the upper hand.  When daybreak arrived the Lord asked Jacob to let him go.  “Not until you bless me,” Jacob demanded.  The scriptures don’t offer us any insight into God’s body language in this scene, but I imagine He smiled a little at Jacob’s audacity.  It was this request that changed history as we know it.  It was here where God changed Jacob’s name to Israel, which is thought to mean “he struggles with God,” and Jacob’s life was forever transformed.

God could have chosen numerous ways to communicate to Jacob in this scenario.  Why do you think He wrestled with him?  Was it because He was angry with Jacob? I don’t think so.  Was it because He wanted to hurt him?  Not exactly.  Did Jacob have the upper hand in the match because he was stronger than God?  No one’s stronger than God.  Did God know that Jacob was going to ask for a blessing?  God knows everything.  Was it part of His plan all along?  Undoubtedly.  I don’t know exactly why God chose a wrestling match to touch Jacob’s heart, but I do know that it was exactly what Jacob needed, and God showed Himself faithful to this scared, angry man in the midst of a tumultuous time in his young life.

Aiden, the point I want to make to you is this: you don’t know it now, but there will be many times in your life where you will question God.  You will question His reasons, His faithfulness, His wisdom, perhaps even His very existence.  Like Jacob, you will be angry, scared, alone.  When those times come, don’t be afraid to wrestle with God.  Fight with Him.  Ask the hard questions.  Come at Him with every ounce of force you can muster.  Yell, scream if you have to.  Don’t be afraid of Him.  He welcomes and delights in the audacity of your fortitude.  But whatever you do, son, don’t let Him go.  Hold tight with all of your might until He gives you the answers you seek.

God knows your thoughts before you even speak them.  As He did with Jacob, your heavenly Father knows the struggles you will have, the lies you will have told, the pain you have felt, the fears you are building up the courage to face.  He knows your questions, and He has the answers.  He’s big enough to hear your accusations and He’s wise and gentle enough to give you a tender answer.  “Ask and keep on asking, seek and keep on seeking, knock and keep on knocking,” and He will give you what you need, for He withholds no good thing from us.

Just like with Daddy, be bold enough to wrestle with a God who can’t be beaten.  Bond with him in that secret manly ritual of love and intimacy.  And refuse to let go until you receive your blessing.