In September of 1998, when Jeremy and I were dating, he gave me a Bible for my birthday.  Though I was strong in my love for the Lord, I was surprisingly immature in my knowledge of scripture.  Bible-reading was never made a priority in my home growing up, and though I attended church most of my life, I had somehow made it all the way to college without knowing key details of even the simplest stories in the scriptures.  The Bibles I had in my home as a kid were usually King James, and though I tried hard to read them, I got too caught up in the “thees” and the “thous” to really grasp what the text was saying.  I would quickly give up and find something more fun to do.

In high school I bought myself a “True Love Waits” Bible.  Yep.  Sure did.  It had the title written in great big purple and green neon colors on the front of it, shouting my declaration of abstinence to the world.  I carried it around proudly.  Then I went to college.  I carried it much more discreetly then.  I think I even bought a cover for it.  I still rarely read it.

Soon into our dating relationship, Jeremy bought me a new Bible.  It was beautiful.  A brown, leather-bound NIV Bible, published by InterVarsity Press.  It was filled with quiet time devotionals, some inspiring, some cheesy.  I was so unbelievably excited when he gave it to me.  He had written on the front page, “With joy in seeing God work in your life.”  I remember exactly where we were when he gave it to me.  It’s the only one I’ve used ever since.  I could find the passages I was looking for, not by chapter and verse as much as by the location on the page.  I kept a card in it that Jeremy had given me as part of a bouquet of flowers, which I used as a bookmark.  It had favorite quotes written in it, spoken by people I love, that I wanted to make sure I always remembered.  It had a picture of two of my favorite little girls in it that my friend had recently given me.  It was the first Bible I read cover-to-cover. 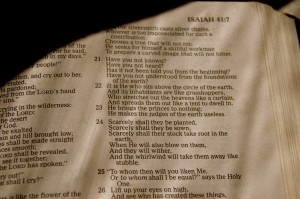 Early last Thursday, I discovered that my car had been broken into (well, not “broken”, exactly.  The doors were accidentally left unlocked, so I suppose it was an open invitation), and my purse was stolen.  It had a good amount of cash in it, as well as my credit cards, insurance cards, library cards, driver’s license, etc.  It was a frustrating experience that made me angry and has robbed me of happiness for several days.  I normally get over things pretty quickly, but I’ve had a hard time with this situation, for some reason.

On Sunday morning as we were headed into church, I went to get my Bible out of my car.  It wasn’t there.  I figured I had left it at home.  Then this morning I searched for it again.  The pink striped bag that I kept it in was nowhere to be found.  It wasn’t in the kitchen.  It wasn’t in the garage.  It wasn’t by my desk.  I checked the car again.  Nothing.

My heart sank as I slowly realized what had happened.

I’m not really much of a sentimental person, and I don’t usually find much value in “stuff,” but that Bible was a priceless treasure to me.  Much more so than the valuables that had been taken from my purse.  I guess because it wasn’t just a Bible, but rather a constant reminder of where I had been and how far the Lord has brought me in my pursuit of Him…or better said, His pursuit of me.  As I think about it, tears come to my eyes.

We live in a country where Bibles are a dime a dozen.  Just this evening I perused the Bible section of a local bookstore and was overwhelmed with my choices.  King James, New King James, NIV, Amplified, Holman, English Standard, The Message, The Message and the NIV in one, The Mom’s Devotional Bible, The Working Man’s Bible, The Ragamuffin Bible, The Duck Dynasty Bible, The Sailor’s Bible (really?), Study Bibles, big thick Bibles with lots of commentary, little tiny Bibles with little tiny 6.5-point fonts, Bibles with zippers…as I looked through the choices, I felt like Bubba on his shrimp boat.

I’ve probably given away more Bibles than I ever owned.  In fact, I gave two of them away this past weekend.  The fact that I had a Bible stolen from me isn’t a very big big deal.  But the fact that I had that Bible stolen from me was heartbreaking.  The attachment I had to it is great, and the more I think about it, the more I realize how much it meant to me.  But as I sit here and try to process my feelings, all I can think about is how thankful I am for the journey that I have been on with the Lord for the last 16 years, and how He has used the words in that book throughout my life.  I’m thankful for the ways in which He has written them on my heart and transformed who I am and how I see the world and make decisions and relate to people.  I’m thankful that, thousands of years after it was written, I can still sit here and marvel at the power of the story and the way God has used it to change the hearts of countless numbers of people all over the world from generation to generation.  I’m thankful for the supernatural way that Jesus can relentlessly pursue someone through a tool that seemingly amounts to nothing more than words on a page.

I’m sad that the Bible I loved is gone.  I don’t have a profound lesson I’ve learned from the experience (other than maybe to be more diligent about keeping my car doors locked), that I can share with the world.  I’m just kind of sad.  But I won’t dwell on the sadness.  I will count the memories with joy and treasure them in my heart.  I will pray that the person who took it is drawn by the Holy Spirit to read it and be affected by its message.  I will be glad that the man who gave it to me sixteen years ago decided to make me his bride despite the immaturity of my faith.  I’ll get a new Bible.  I’ll learn new truths.  I’ll write new notes.  I’ll underline new favorite passages.  I’ll make new memories.  I’ll have new adventures.  I will rejoice in the goodness of the Lord and the blessing of His word and the power of its life-changing Truth.

Do you have a favorite Bible?  Does it have a story behind it?  I’d love to hear it!  Feel free to share your story here.